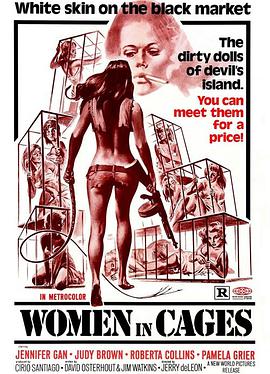 Carol Jeffries (known as 'Jeff') is a naive American woman staying in the Phillipines. She is given ten years in prison after being set up by her drug-dealer boyfriend, Rudy. She endures the harsh conditions, sadistic head matron and attempts on her life, then convinces her cell-mates to try to escape with her through the jungle, in spite of the knowledge that ruthless trackers will be sent out after them.”                                                                    “Legend has it that Sam Arkoff, head of American International Pictures saw a statuesque Grier at his company switchboard and cast her on the spot for her breakthrough hit Coffy. That, as they say, is bull shee-it. The former beauty queen made her film debut in 1970 as an extra in Russ Meyer's big breast bonanza Beyond The Valley Of The Dolls, and appeared in a number of B-pics shot in the Philippines the following year for AiP's rival company, Roger Corman's New World Pictures. Alongside her role as the tough-as-nails prostitute in Big Doll House were supports in the horror flick The Twilight People and as a topless hooker (again!) in Cool Breeze, then back behind bars for Women In Cages.                                                                    In Women In Cages, Grier plays the sadistic warden for once, a pot-smoking lesbian with a fully-equipped torture chamber (including a guillotine!). The 'New Fish' (a recent inmate, for you prison film novices), a ditzy blonde ex-stripper called Alabama, has taken the heroin possession rap for her pimp boyfriend. She knows too much, so the pimp blackmails her cellmates to execute her. A competent and well-shot entry in the tropical prison genre from Filipino director Gerry De Leon, it places the embittered ex-addict and prostitute Grier in the position of slave owner, watching her white charges toiling away in the plantation with obvious ironic glee.